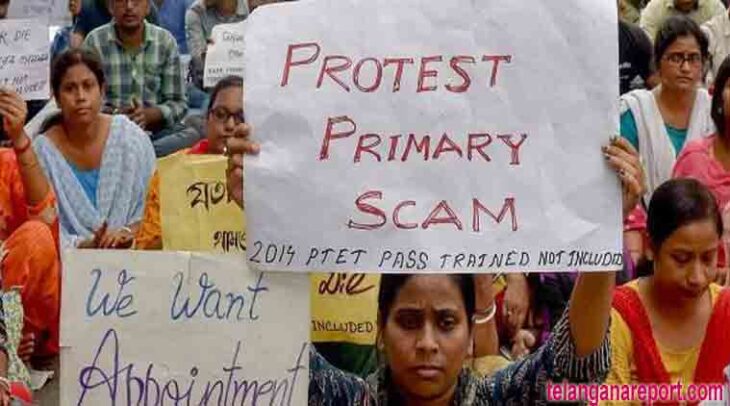 Kolkata, Oct 21 : High drama was witnessed at the site of the sit-in by TET candidates here on Thursday midnight as police dispersed the protesters, saying section 144 of the CrPC had been imposed in the area.

A strong police contingent led by senior officers removed the 500-odd protesters, who claimed to have qualified the 2014 TET exams but were still omitted from the merit list, from near the head office of the West Bengal Board of Primary Education.

Section 144 of the CrPC prohibits the assembly of four or more people in an area. Violation of the order is punishable under section 188 of the Indian Penal Code.

The agitators had earlier ignored repeated pleas by police to vacate the spot insisting they would leave only after getting appointment letters for teaching jobs in state-run and state-aided primary schools.

A police officer said as the agitators refused to move away from the spot despite repeated appeals, minimum force was used to remove them from the site around 12.35 am.

However, the protesters alleged that police physically abused some of them.

“We were manhandled by the cops who dragged us away and dumped us in three waiting vehicles. Even women were physically abused,” Shila Das, a protester alleged.

She claimed police had undemocratically attacked them even though they had shifted 100 metres away from the spot where they were protesting earlier after being informed of the imposition of section 144 of the CrPC.

Condemning the incident, BJP MLA Agnimitra Paul said, “Police beat up young protesters, including women, after dusk. We will not tolerate this and there will be protests all over the state against the high handedness of police on October 21.”

“Chief Minister Mamata Banerjee had promised to directly appoint around 20,000 TET candidates who had qualified in the 2014 and subsequent tests but why only 6,100 posts are filled up now. Why 2014 TET candidates are being asked to sit for tests and interviews now?” she asked.

The protesters, on indefinite sit-in since October 17, had earlier asserted that they will not leave the area without their appointment which led to the deployment of additional police personnel, including women constables and Rapid Action Force, in the area.

Since Thursday evening, they sat in small groups so as not to violate the prohibitory orders and held each other’s hands as a mark of solidarity.

The indefinite sit-in by the candidates of the Teacher Eligibility Test (TET) 2014 had entered its fourth day on Thursday. They claimed to have qualified the test but were overlooked by the board during recruitment. Twenty agitators were on hunger strike for the past three days.

About 100 others, who claimed to be TET 2017 candidates, began a dharna about half a km away. There was, however, no police personnel at that spot.

Earlier in the day, state BJP president Sukanta Majumdar visited the sit-in venue and expressed solidarity with the agitating candidates.

The protesters had turned down the requests of state Education minister Bratya Basu and president of West Bengal Board of Primary Education Goutam Pal to withdraw the agitation and sit for a fresh test and interview.

If we go through the entire process of written test and interview again, how can it be ensured that we will not be discriminated against again? one of the agitators had told reporters.

Pal, however, argued that the Board cannot directly recruit the TET 2014 candidates if their names do not figure in the panel.

How can we take candidates from outside the panel merit list? The board will not be in a position to accede to such pleas, he said.

About reports that eligible TET candidates were deprived of jobs while undeserving ones were chosen during the tenure of his predecessors, Pal had said, The matter is being investigated and as per the directive of the (Calcutta) high court. Several candidates have already been recruited.

The Board president had said, We are ensuring transparency and fairness in the recruitment process. I urge the agitators to have faith in us and withdraw the sit-in, which is disrupting the functioning of the Board .