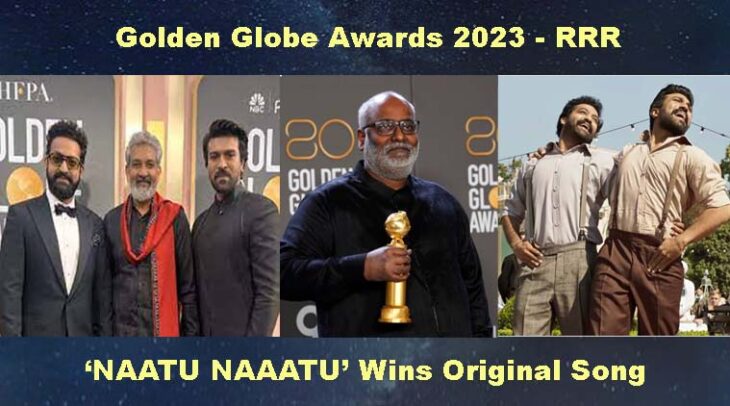 Composed by veteran music director MM Keeravaani, the song has been a rage ever since the release of the Ram Charan and Jr NTR-fronted “RRR”.

Hours after the ceremony concluded, Rajamouli shared a brief but heartfelt note on Twitter underscoring the boundless ability of music to connect with different cultures.

“SPEECHLESS. Music truly knows no boundaries,” the filmmaker wrote.  He thanked Keeravaani, who is also his cousin, for creating the wonder that is “Naatu Naatu”. “Congratulations & thank you PEDDANNA for giving me #NaatuNaatu. This one is special,” he added.

Rajamouli, who attended the award ceremony with his leading men and Keeravaani, also expressed his gratitude towards fans around the world for showering love on the song. “I thank each & every fan across the globe for shaking their leg & making it popular ever since the release #GoldenGlobes,” he said.

In his award acceptance speech earlier in the day, Keeravani had thanked Rajamouli for his “vision”.

“It has been an age-old practice to say that this award actually belongs to someone else. So I was planning to not say those words when I get an award like this, but I’m sorry to say that I’m going to repeat the tradition because I mean my words.

“This award belongs to, in order of priority, my brother and the director of the movie, SS Rajamouli for his vision. I thank him for this constant trust in my work and support,” Keeravani had said.

The music director also thanked the team behind the track — choreographer Prem Rakshith, lyricist Chandrabose and singers Sipligunj and Bhairava. “And NT Rama Rao Jr and Ram Charan for dancing with full stamina for the song,” he had said.

“Naatu Naatu” has already made it to the 95th Academy Awards shortlist for best original song, along with 14 others. “RRR” was also nominated for the Golden Globe of best picture-non English category, an award it lost to “Argentina, 1985”.