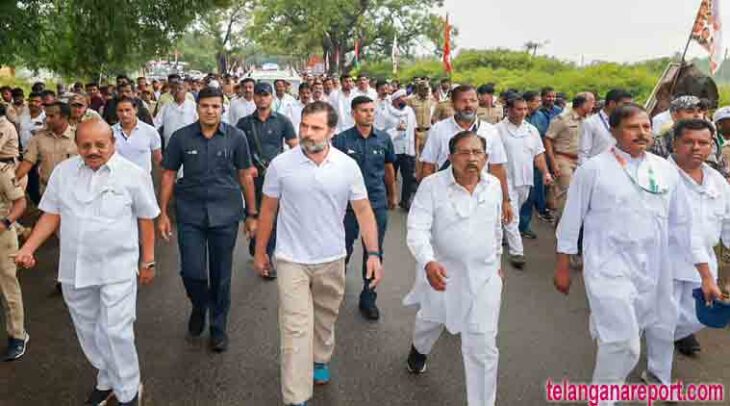 Hyderabad, Oct 26 : After a gap of three days, the Congress’ Bharat Jodo Yatra led by Rahul Gandhi will resume from Maktal in Narayanpet district of Telangana on October 27, the party sources said on Wednesday.

The Bharat Jodo Yatra entered the state via Gudebellur on October 23 morning, after exiting Karnataka from Raichur. After a brief march it took a break for three days from Sunday noon till October 26.

The yatra will resume at 6.30 AM from 11/22 KV Substation in Makthal and after covering three kms he may visit and offer prayers at Kanyaka Parameswari temple, sources said.

Gandhi is expected to reach the state this evening, TPCC sources said.

The Gandhi scion-led march is expected to complete 26.7 Km on Thursday and halt at Sri Balaji Factory, Makthal for the night.

From Makthal, the yatra will continue for 16 days in Telangana, covering 19 assembly and 7 Parliamentary constituencies for a distance of 375 km, before entering Maharashtra on November 7.

The march will take a one-day general break on November 4.

The Wayanad MP will meet intellectuals, leaders of various communities, politicians, sports, business and cinema personalities even as some of them are getting ready to join him during the trip.

Rahul will visit some prayer halls, mosques and Hindu temples in Telangana. Interfaith prayers will also be offered, the TPCC said.

The Bharat Jodo Yatra commenced on September 7 from Kanyakumari in Tamil Nadu.

Gandhi completed the marathon walk in Kerala, Andhra Pradesh and Karnataka before beginning the Telangana leg of the yatra.

The State Congress has formed 10 special committees to coordinate the journey in Telangana.