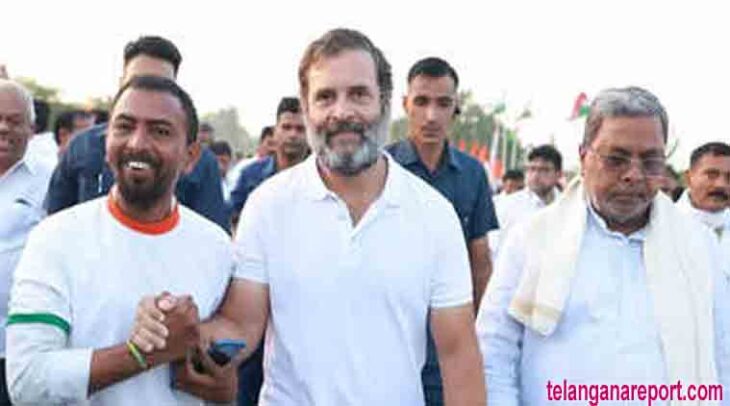 Gandhi was accorded a grand welcome at the Telangana-Karnataka border by Telangana Congress leaders when the yatra entered the state.

Congress Lok Sabha member and in-charge of party affairs in Telangana Manickam Tagore, state Congress president A Revanth Reddy, and a number of party leaders welcomed Gandhi. Scores of activists were present at a bridge on Krishna river at the border when the yatra marched into Telangana.

The Wayanad MP walked briefly in Telangana and took a halt at Gudebellur in Narayanpet district of the state. He left for Hyderabad by a chopper and will later fly to Delhi, Congress sources said.

The yatra will be on break during Diwali for three days from Sunday noon till October 26, a press release from Telangana PCC said on Saturday.

After that, the yatra will resume on October 27 morning from Gudebellur. It will reach Makthal and continue for 16 days in Telangana, covering 19 assembly and seven Parliamentary constituencies for a distance of 375 km, before entering Maharashtra on November 7.

Gandhi will be undertaking 20-25 km ‘padayatra’ every day and interact with people during the foot march.

Gandhi will visit some prayer halls, mosques and temples in Telangana. Inter-faith prayers will also be offered, the TPCC said.

The Bharat Jodo Yatra began on September 7 from Kanyakumari in Tamil Nadu. Gandhi completed the marathon walk in Kerala, Andhra Pradesh and Karnataka before beginning the Telangana leg of the yatra.