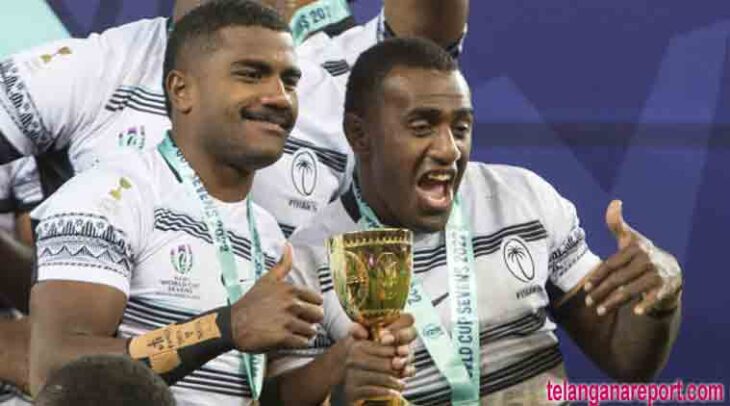 Cape Town, Sep 12 (AP) Fiji is back on top of the world in rugby sevens.

For New Zealand, it was double despair on the final day of the Rugby World Cup Sevens on Sunday.

Fiji beat New Zealand 29-12 to claim the men’s title in Cape Town, a third World Cup crown for the flying Fijians but their first since 2005. It stopped the New Zealanders claiming their third straight title.

New Zealand also lost the women’s final at Cape Town Stadium when Tenika Willison agonizingly missed a conversion with time up that would have forced the decider against Australia into extra time.

Willison watched her kick slip past the left post and Australia clinched it 24-22, and prevented a third straight triumph for the New Zealand women.

Fiji and New Zealand both missed parts of the men’s world series season because of COVID-related travel restrictions but have been back near their best since returning to the circuit.

It was Fiji’s day at the World Cup, with Joseva Talacolo motoring down the left wing to set the t one with the first try inside 30 seconds of the final. It was 12-0 through Kaminieli Rasaku before New Zealand had launched a meaningful attack.

New Zealand did get one back from Moses Leo on its first foray into Fiji’s 22 but electric breaks by Elia Canakaivata and Filipe Sauturaga put the Fijians out to a 24-5 lead at halftime.

That gap was too much for New Zealand and, although Fiji lost two players to yellow cards in the second, the defense held and Pilipo Bukayaro capped a five-tries-to-two victory with another score right at the end.

Fiji has won gold at the last two Olympics but the 17-year wait for the World Cup is over for rugby sevens’ most celebrated team.

Australia and New Zealand are the only two women’s teams to win a World Cup and they were expected to meet in the final.

The match swung back and forth, with New Zealand in the ascendancy early before a hat trick by Maddison Levi helped the Aussies go ahead 24-10.

New Zealand fought to the end and, when Alena Saili went over more than a minute after time was up on the clock, there was a chance of tying the scores with Willison’s conversion.

The ball drifted left and Willison slumped down and looked at the ground as the Aussies celebrated a memorable year and a World Cup title to go with their world series triumph.