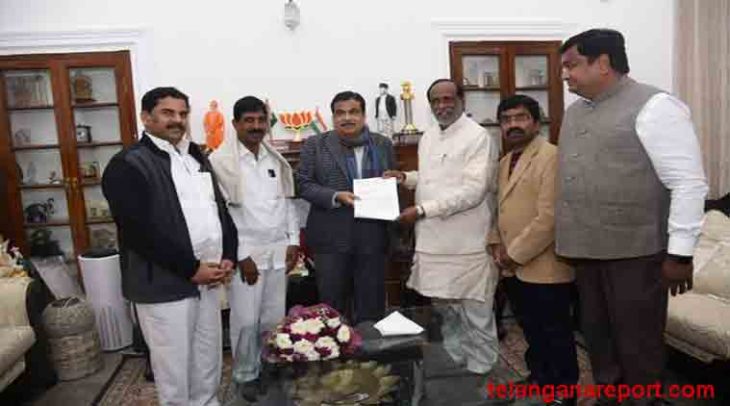 Hyderabad (Telangana), Feb 2 : The Telangana BJP unit has requested Union Minister for Road Transport and Highways Nitin Gadkari to sanction funds for the conversion of NH-44 from Bowenpally to Medchal via Kompally on the outskirts of Hyderabad from four-lane to six-lane.

“As the city of Hyderabad is fast-growing and expanding towards all directions, the road of Bowenpally-Kompally-Medchal (NH-44) has become so busy leading to traffic congestions due to non-expansion of the road,” read the memorandum given by the Telangana BJP.

“This road leads to North Telangana, which covers the erstwhile districts of Ranga Reddy, Medak, Nizamabad and Adilabad. Hectic activities go on this road with establishment of several residential colonies, gated communities, apartments, multiplexes, showrooms and so on. To reach sensitive defence areas like Air Force Academy, Dundigal, Air Force Station, Hakimpet and Defence and Cantonment Areas, one has to pass through this road,” it added.

The memorandum stated that the traffic between Bowenpally and Medchal increased manifold because the Outer Ring Road junction at Kandlakoya is located on NH-44 road and the passengers from North Telangana districts have to pass through this route to reach Secunderabad Railway Station.

“The NH-44 upto Kompally is within the jurisdiction of Greater Hyderabad Municipal Corporation (GHMC). The MMTS lines from Sanathnagar-Moulali and Secunderabad-Bollarum-Medchal also pass through this area only. To ease traffic congestion, the road may be converted from four-lane to six-lane for the convenience of residents of not only of this area but also the whole Telangana and Secunderabad area,” it said.

“Therefore, the BJP Telangana unit requests for sanction of funds for conversion of NH-44 from Bowenpally to Medchal via Kompally from four-lane to six-lane road, for which we will be grateful to you,” the memorandum further stated.