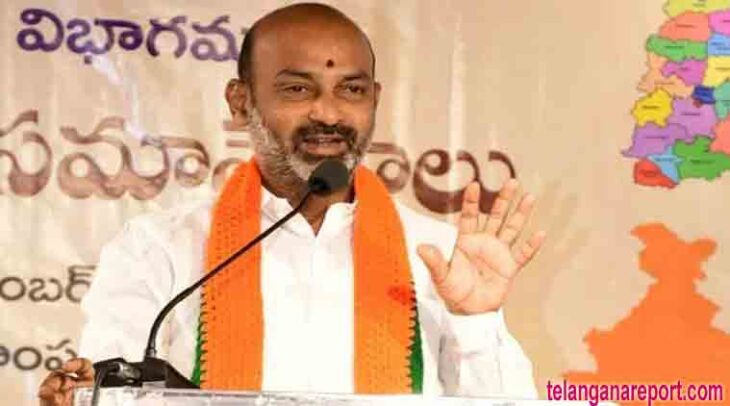 The state is currently under turmoil as the VRAs have been on strike for 50 days.

“The VRAs are on strike for 50 days. So far 30 VRAs have died. They are poor, hardworking employees and are merely asking for promises made by KCR in the state Assembly to be fulfilled. They are going on strike as KCR is not fulfilling the promises given by him,” Sanjay said.

Taking a jibe at the government he further said that ministers and MLAs have not been paying attention to the concerns of VRAs and instead are baton charging the VRAs sitting on strike. “BJP strongly condemns the baton charge against VRAs”, he said.

Sanjay added, “the VRAs who went to the siege of Pragati Bhavan were beaten and taken away. Assembly meetings were held to scold PM Modi and the Centre, but there was nothing else in it. Why not discuss VRA issues in assembly? He is holding an assembly in an imperative situation, but not with any other intention. KCR does not even want to hold assembly meetings”.

Sanjay intensifying his attack on KCR called him a fascist for rebuking the Prime Minister who works for 18 hours continuously for the country.
“A great Prime Minister who works 18 hours, the world has accepted his greatness and he is being rebuked by KCR, ‘you (KCR) are fascists’. KCR has caught Modi syndrome. Moreover, KCR dreams of becoming the leader of the country. Who cannot give an appointment to anyone?”, he said.

KCR earlier had passed remarks about sending PM home in 18 months, which wasn’t taken in high spirits by the BJP. Commenting on the same remark Sanjay said, ” KCR went to meet Nitish Kumar, he asked if you were dissolving the assembly. KCR changed his decision when Nitish Kumar said that if the Assembly is dissolved the President’s rule will be imposed and you will be sent to jail. If KCR has the guts, the Assembly should be dissolved and elections should be held”.

“He is saying that the BJP hasn’t got 36 per cent votes. And how much is your party? The BJP is the largest party in the world. BJP is the only party with maximum membership. Is your party similar to ours? A party without a cadre, capacity is a TRS party”, added Sanjay.
As per claims made by Sanjay, the Centre is giving 32,000 MW power to Telangana, and KCR on the other hand has been trying to mislead people.

“Nowhere in the electricity bill brought by the Centre is there any provision for meters for motors. However, KCR is talking in the Assembly to mislead the people. The Centre is giving 32,000 MW power to Telangana. Isn’t it a fact that a 4,000 MW power station is being built in Ramagundam?”, he added.
Sanjay alleged, “The CM who made the assembly a platform and tried to tell lies should immediately apologize to the Telangana people. KCR should first name a new secretariat after Ambedkar or Sardar Vallabhbhai Patel. KCR removed Ambedkar’s photo and put his own photo in TRS Bhavan”.