Hyderabad, June 26: State Level Co-ordinating Agency Telangana, Under New Hope Association has organized an event in Venkat Reddy Nagar, Ramanthapur for Community Leaders in the Region on the eve of “International Day on Drug Abuse & Illicit Trafficking, with the support from Ministry of Social Justice and Empowerment, Govt of India.

This programme is Chaired by M. Sanjeev Kumar, Co-ordinator, State Level Co-ordinating Agency, New Hope Association, Hyderabad – Telangana. Welcomed all the participants and Local Leaders and explained about the importance of the International Day On Drug Abuse &Illicit Trafficking, and the role of SLCA-Telangana in conducting the event with support from Ministry of Social Justice and Empowerment.This Programme was conducted with the aim bring awareness among the youth and General Public on the ill effects of substance use. 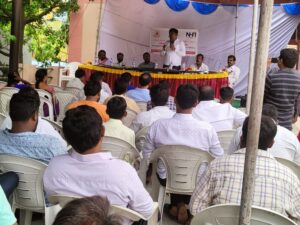 Mr. Gaddam Sai Kiran, President Venkat Reddy Nagar Welfare Association, has address the gathering with youth to be vigilant and say no to drugs and Alcohol, He remembered swamy Vivekananda teaching to the youth and said that one should inculcated good habits to leave a fruitful life parents there is a need to play an important role by parents at individual level. He also assured his full support for New Hope Association, they initiate to identify the affected individuals in the area and refer to the Rehabilitation centre as and when required.

He thanked NEW HOPE ASSOCIATION and Ministry of Social Justice and empowerment govt of India, for conducting this awareness’ camp in Venkatreddy Nagar Colony has it was a important need of the youth.

The programme was Co-ordinated Mr. Sanjeev Kumar, Co-ordinator, State Level Co-ordinating Agency and extended sincere thanks to Mrs. Komali Krishna Reddy, General Secretary, further extended is gratitude to all the team member of SLCA, ODIC, and IRCA’s working in Hyderabad.

The meeting was concluded with message about the International Day Against on Drug Abuse and Illicit Trafficking, and its importance, and the role of community leaders in addressing the issue and Venkat Reddy Nagar, Ramanthapur, Hyderabad and meeting winded up with the vote of thanks from Mrs. Santoshi, ODIC Co-ordinator