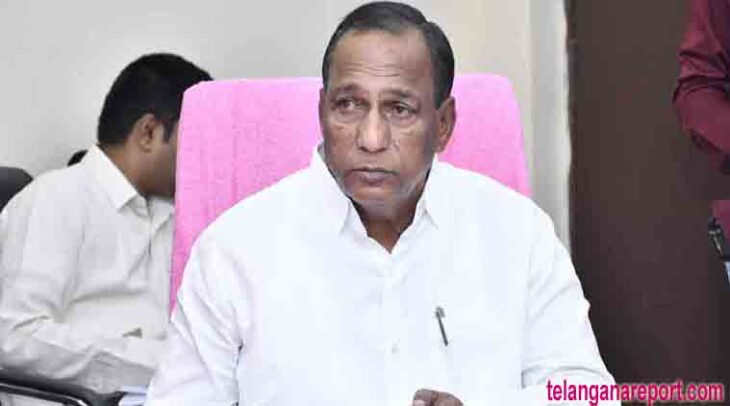 Hyderabad (Telangana), November 28 : Telangana Rashtriya Samithi (now Bharat Rashtriya Samithi) leader and State Labour Minister Malla Reddy on Sunday reacting to the recent income tax raids against him said that he is not afraid as CM KCR is with him.

Malla Reddy’s remarks came during the inauguration event of a water plant in Bahilampur in Mulug Mandal in Medak District.

During his inaugural address, Telanga Minister said that the central agencies can suppress him with 500-600 police and CRPF personnel or can conduct raids on him but he is not afraid, as long as Chief Minister K C Rao is with him. “In the 2024 general elections, the KCR-led Bharat Rashtriya Samithi will form the Government at the center,” he added.

Malla Reddy called out the raid of the Income Tax department, the Minister of Labour and Employment in the Telangana government, Malla Reddy, on Thursday alleged that the case against him by the Income Tax officer is an act of revenge.

The Telangana minister asserted, “I didn’t tear any documents or snatch any laptop”.

Notably, a case has been registered against the Minister at the Bowenpally police station under sections 353 and 506 of the Indian Penal Code (IPC) for allegedly harassing an Income Tax (IT) Officer on Duty, as per the police officials.

As per the Minister’s statement, the IT Department allegedly took his son’s signature on a document that mentions that “100-crore black money” was found in his possession.
About the incident that happened, where the IT department officials were getting some official papers signed by the minister’s elder son Mahender Reddy, the Minister clarified, “My elder son is in hospital, I told them not to take his signs and get them from my younger son, Bhadra Reddy instead. I suddenly came to know he is being made to sign”.

The minister further questioned, “I rushed to the hospital but they had left. What was the hurry?”

Addressing the case registered against him wherein the Income Tax officer Ratnakar complained that the Minister forcefully snatched a laptop, mobile phone and evidence in Hyderabad, Minister Malla Reddy stated, “I treated officers with much respect. He left the laptop at my house. I returned it to the police station. What wrong have I done?”

About the IT Raids conducted on him, the Minister asserted, “Not the first time that IT raids have been conducted on me. They’re doing their work and we’re showing our work. But I never saw such a large-scale raid. Am I a smuggler? Am I involved in hawala business? Do I run a casino?”
“I run educational institutions”, the Minister further clarified.

Notably, the IT Department has raided 65 locations related to the ministers and has conducted raids on the family members of the minister as well as the educational institution owned by the Telangana minister and his staff, the minister informed in his statement.

Alleging the Central government of Revenge, the Minister said, “The reason (behind the IT raid) is that I am a TRS minister. Everyone is being targeted. If you have to conduct a raid, there are 19 BJP-ruled states, do it there. CM KCR is doing good work, why do you have to do it here? Are we doing bad work here?”

The minister further alleged that the central government has been unable to provide electricity, pensions and water.
“Keeping up with the Telangana model, the Bharat Rashtra Samithi (formerly known as Telangana Rashtra Samithi) will make its presence felt in the 2024 Lok Sabha elections. These raids are being conducted to exert pressure on us”, alleged the Telangana Minister.

Notably, in connection to the matter, Bhadra Reddy, the son of Malla Reddy, has also registered a case against the IT officer at the Bowenpally police station, the police officials informed.