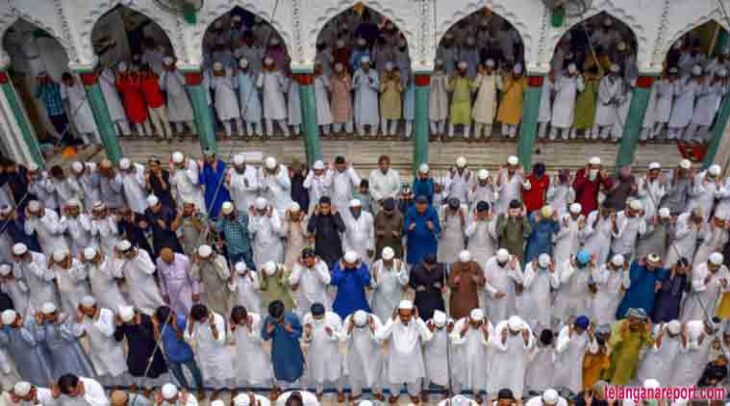 New Delhi, Jul 21 : Eid-ul-Adha was celebrated across the country with limited number of people offering prayers at mosques amid gathering curbs due to the coronavirus pandemic.

Modi tweeted, “Eid Mubarak! Best wishes on Eid-ul-Adha. May this day further the spirit of collective empathy, harmony and inclusivity in the service of greater good.”

The Border Security Force (BSF) and Pakistan Rangers also exchanged sweets at various points along the border, the first time since Pakistani side shunned the custom in 2019 after the Centre abrogated provisions of Article 370 of the Constitution, which gave special status to Jammu and Kashmir.

A BSF spokesperson said the “exchange of sweets took place between the BSF and Pakistan Rangers on the occasion of Eid at JCP (joint check post) Attari” in Punjab’s Amritsar district.

A similar exchange of sweets took place between the two forces along the border in Rajasthan and Jammu.

Sweets were also exchanged between the BSF and their Bangladesh counterpart BGB at multiple locations along the 4,096-km-long border.

In Uttar Pradesh, the usual buzz was missing as people preferred to celebrate the festival in the confines of their homes.

Led by Maulana Khalid Rashid Farangi Mahali, around 50 people offered namaz with masks on while maintaining social distancing at the historic Eidgah in Lucknow.

They prayed for the eradication of coronavirus and development of the country, a statement issued by the Islamic Centre of India said.

The centre had issued an advisory for celebrating the festival in accordance with the government guidelines, which had said that not more than 50 people should gather at any place at a given time.

In Tamil Nadu, the devout offered prayers at mosques in conformity with COVID-19 protocols.

Special prayers were held across the state in mosques and other designated places and many said they prayed for an early end to the Covid-19 pandemic and all-round prosperity.

Meanwhile, Eid was celebrated with fervour in neighbouring Puducherry, with prayers being held in mosques, including at Nellithoppu.

The Muslim community in Kerala celebrated Bakrid in a subdued manner at their homes sans usual social gatherings.

Mass namaz at mosques were absent this year also as the government continued to impose strict restrictions fearing resurgence of the pandemic after a drop in cases this month.

As only 40 people were permitted for prayers adhering to stringent pandemic protocol, there was no usual festive mood in mosques across the southern state, which used to witness a sea of devotees since morning during the occasion.

Devotees could be seen following social distancing norms during the prayers inside the mosques.

Considering their safety, the majority of mosque authorities have asked devotees to come for the Eid prayer in the morning after performing “Vulu” (cleaning) and to carry their own “Musalla” (sheet for niskaram)”.

They also seemed to avoid the usual exchange of pleasantries and embraces after the prayers.

The Supreme Court’s criticism of the government’s relaxations for Bakrid in areas with high COVID- 19 positivity rate further dulled the spirit for some ahead of the festival.

“Hearty wishes to all the countrymen on Eid-ul-Adha. May this festival bring happiness and prosperity in your lives,” Kejriwal tweeted.

The day lacked usual hustle bustle and festivity as major mosques such as Jama Masjid and Fatehpuri Masjid in old Delhi were closed for the visitors.

Police personnel were also deployed outside the mosques to prevent crowding.

“As congregational prayers are not allowed due to COVID-19 restrictions, just a few staffers and their family members offered namaz on Eid-ul-Adha today. People themselves are careful and not thronging the mosques to keep safe from the virus,” said Syed Ahmed Bukhari, Shahi Imam of Jama Masjid.

A senior police officer said,”Posters were also pasted with police wishing everyone Eid Mubarak and at the same time urging them to celebrate the festival at home with their families and stay safe.”

The celebrations in Kashmir were a low key for the third consecutive year since August 2019.

A majority of the faithful marked the festival of sacrifice by offering prayers in small groups and observing social distancing.

No prayers were offered at major mosques and shrines of Kashmir due to restrictions on large gatherings, officials said.

While small gatherings for Eid prayers were witnessed at local mosques, some people preferred to offer the prayers at home.

Thousands of sheep and goats were sacrificed by Muslims across the Valley to mark the tradition of Prophet Ibrahim, the officials said.

“In view of evolving situation, I urge everyone to follow the Covid preventive protocols, offer Eid prayers at home and stay safe,” he added.