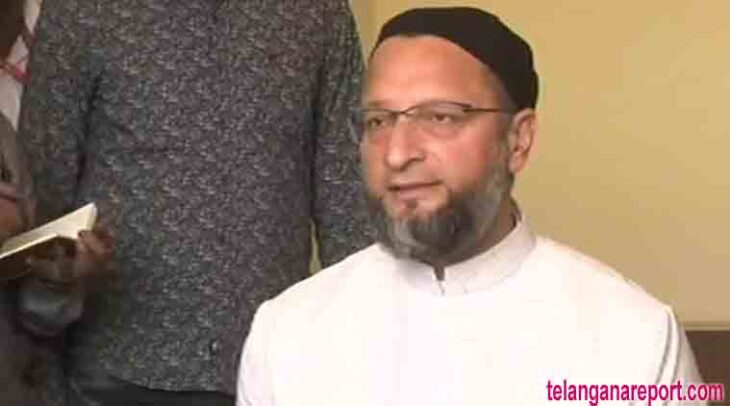 Danilimda (Gujarat), November 24 : All India Majlis-E-Ittehadul Muslimeen (AIMIM) chief Asaduddin Owaisi attacked Prime Minister Narendra Modi over unemployment in the country by cracking a joke. He said he met a young man at a hotel who used a joke to explain his situation in life.

“Main jis ladki se shaadi karna chahta hun, usne mujhse aa kar kaha ki ‘aapki sarkari naukri kab lagegi, papa ladka dhund rahe hain (The girl with whom I want to get married asked me when will you get a government job? My father is looking for a bridegroom),” Owaisi quoted the man as telling him in a rally on Tuesday.

According to Owaisi, the man told his girlfriend, “Modi sarkar par bharosa mat karo, tum shadi kar lo’ (Do not trust the Modi government, you get married),” Owaisi added quoting the man, while taking a jibe at PM Modi over the lack of government jobs in the country.

Hitting out at the “reduced” number of jobs to be provided till 2024, in comparison to those announced during the BJP campaign for the 2014 General Elections, the AIMIM chief said, “PM Modi had promised to give 2 crore jobs in 2014. It’s been eight years, now he says 10 lakh jobs will be given till 2024. 16 crore jobs should have been given till now. Now he has reduced it to 10 lakh jobs.”

AIMIM is contesting 14 seats in the upcoming Gujarat Assembly polls for which the party announced the names of 14 candidates.

The party is looking to garner some voter share and attacking the government for the same over unemployment and the recent Morbi bridge collapse incident that claimed the lives of over 130 people.

Addressing a public meeting in Ahmedabad, Owaisi said, “If BJP takes credit for making Gujarat, they should also tell us who is responsible for making Morbi bridge where 140 people died due to collapse. But still, the company’s rich people are not caught. PM Modi, why do you love rich people?”

The Morbi incident took place weeks ahead of the announcement of the elections in the state earlier this month, triggering speculations of a political setback for the ruling BJP in the state.

Last week, Owaisi was greeted with “Modi-Modi” chants and was shown black flags as he was campaigning for his party candidate from the East Surat constituency in the upcoming assembly elections in Gujarat.

In videos that went viral on social media, the youths could be seen waving black flags as a mark of protest against the AIMIM chief in the city. Owaisi, however, ignored the protest and appealed to people to support his party in the upcoming assembly elections during the rally.

The Elections for the 182-member State Assembly will be held in two phases on December 1 and 5. The counting of votes will be taken up on December 8.

In Gujarat, the ruling BJP has been in power for over 27 years and is seeking its seventh term in office.