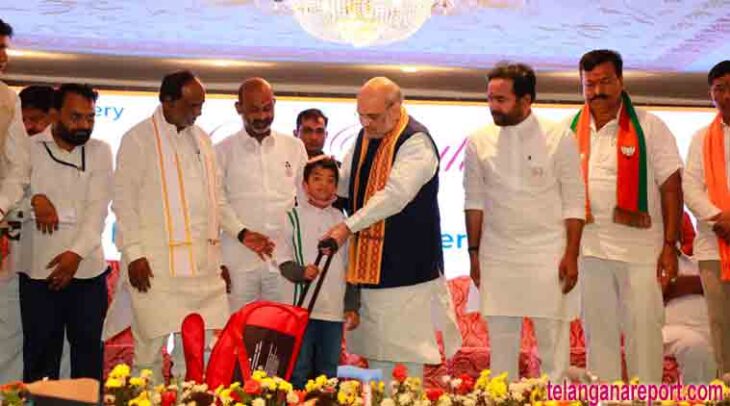 Hyderabad (Telangana), September 18 : Union Minister for Home and Cooperation Amit Shah, on the birthday of Prime Minister Narendra Modi, presented various equipment to the specially-abled and cleaning machines to government schools and community hostels at a service program organized in Hyderabad on Saturday.

Union Culture and Tourism Minister G. Kishen Reddy and many other dignitaries were also present at the event.

In his address, Amit Shah said, “Today is the birthday of Prime Minister Narendra Modi who has brought global pride to the Nation. Prime Minister Modi urges that every person should involve themselves in work of service in some area or the other so that crores of poor, downtrodden, backward and needy persons across the country get help and their condition is improved.”

The Home Minister said “Narendra Modi has devoted his entire life to helping people living in want. After coming to the government, he introduced many schemes to raise the standard of living of 60 crore poor people. Insurance of Rs 5 lakh has been given to crores of poor for home, electricity, water, toilet and cooking gas cylinders as well as for treatment in illness.”

The Union Home and Cooperation Minister said, “The biggest work done by Prime Minister Modi is to give a respectable name to any kind of disability caused by birth or accident. Modi has given such people the right to live with full respect by calling them Divyang. Earlier people used to look at the specially abled with compassion, but now they look at them with respect.”

Amit Shah said, “Prime Minister Narendra Modi has devised many works for the disabled. Every Rupee note has also been printed in Braille to enable the visually impaired to identify currency notes and India is the only country whose currency is also written in Braille script.”

He said apart from this, arrangements have been made for easy access to lifts for Specially Abled persons in government offices, as well as keeping in mind the needs of the Specially Abled in public transport.
The Minister of Home and Cooperation said, “The Ministry of Social Welfare, Government of India, has provided means of assistance to crores of people to go about their lives. He said today many differently-abled have been given some such means which will help them on a daily basis and they will be able to stand with respecting society.”