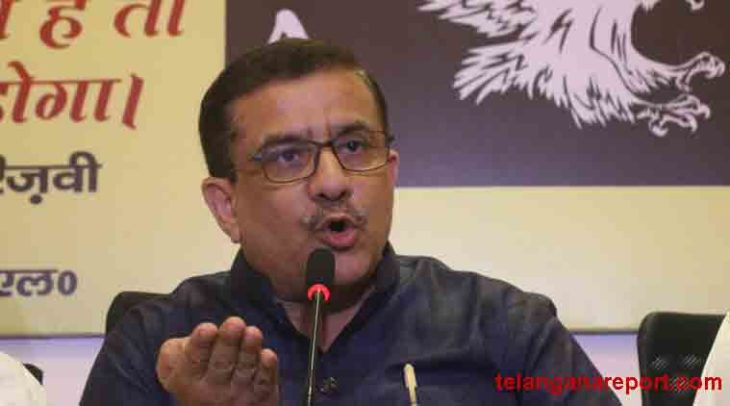 Lucknow/Hyderabad (Uttar Pradesh/Telangana), Feb 19 : Central Shia Waqf Board chief Wasim Rizvi on Wednesday expressed hope that a date for the construction of a grand Ram temple in Ayodhya would be finalised in the first meeting of the Ram Janmabhoomi Teertha Kshetra Trust being held today.

“The structure at the site was made by Mir Baqi who followed Shia faith. In actuality, the land should have been given to the Shia community. But we are happy with the decision that the land was given to Sunni community as it was an evil act committed by Mir Baqi,” he added.

He advised the Sunni Waqf Board to build an educational institution at the land granted to it by the government.

“The Sunni Waqf Board should act wisely and should not go into any other dispute. They should use this land to construct an educational institute where students of any religion can get an education rather than constructing a mosque or a madrasa there. They should forget what happened in the past,” he said.

In a related development BJP MLA from Telangana Raja Singh also hoped that the date of laying the foundation stone of Ram temple will be decided in the first meeting of the trust.

“The construction of Ram Temple at Ayodhya was the dream of every devotee of Lord Ram. I am happy that the judgment of the Supreme Court was in favour of the ‘Ram-bhakts’,” Singh told ANI.

“Prime Minister Narendra Modi and Home Minister Amit Shah have formed a very capable committee. There will be the first meeting of this committee today. There is a hope that the date of laying the foundation stone of the temple will be decided today. The devotees from Telangana will help in the construction of Ram temple like the ‘Vaanar Sena’,” he added.

The 15-member Shri Ram Janmabhoomi Teerth Kshetra Trust, mandated by the central government to oversee the construction of Ram temple in Ayodhya, was scheduled to hold its first meeting on Wednesday evening in New Delhi.

It is set to finalise “muhurat” for beginning construction and transparent mode for collection of funds apart from discussing the future course of action.

The Trust notified by the government has its office in Greater Kailash in New Delhi which is also the address of advocate K Parasaran, who had represented Ram Lalla in the decades-old dispute.