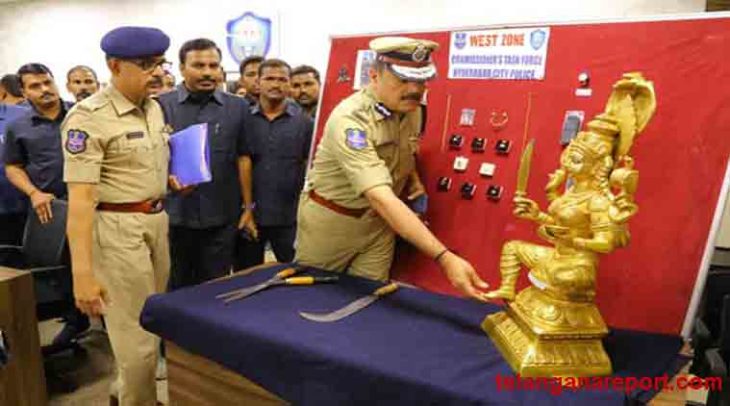 Hyderabad (Telangana), Feb 26 : Four persons were arrested on Tuesday for allegedly trying to sell a ‘Nagamai stone and an idol of goddess Durga worth Rs 1 crore, claiming they would bring wealth if kept inside the house. Police have seized the idol and stone.

The arrested persons have been identified as B Devender, T John, Prem Chand Gupta and Mohammad Ashraf, all residents of the old city.

According to Anjani Kumar, Commissioner of Police (CP), Hyderabad City, Devender purchased the ‘Nagamani stone’ from a dealer in Mumbai and had been keeping it in his house in Hyderabad for the past three years.

Later upon befriending John and others, he informed them about the precious Nagamani stone and they told him about the idol they possessed, which they claimed would help all of them earn huge profits if sold off together with the stone.
On Tuesday, all four were nabbed when they were attempting to in sell the idol and the stone.

They were produced before court and remanded in judicial custody.
An investigation is underway.