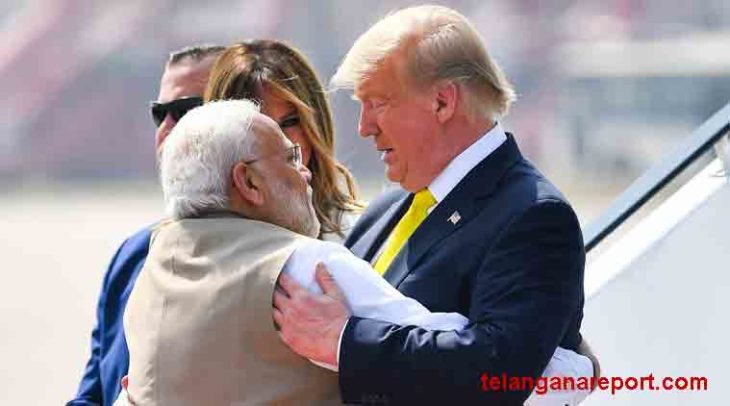 arrived in Ahmedabad on Monday for the first leg of his India trip.

The Air Force One plane carrying Trump and his wife Melania landed at the Sardar Vallabhbhai Patel international airport here at 11.37 am, officials said.

In Ahmedabad, Trump will visit Mahatma Gandhi’s Sabarmati Ashram, take part in a roadshow with Modi and jointly address over one lakh people at a cricket stadium, before heading for Agra to see the iconic Taj Mahal with Melania.

Trump, who is also accompanied by daughter Ivanka, son-in-law Jared Kushner and top brass of his administration, will get a taste of India’s cultural melange during his high- optics Gujarat itinerary, after the bonhomie between the two leaders at the ‘Howdy, Modi!’ event in Houston last year.

The US president and Modi will participate in a roadshow from the airport to Sabarmti Ashram and from there to the newly-built Motera cricket stadium, where over a lakh people are expected to be present for the ‘Namaste Trump’ event.

Dance groups and singers from different parts of the country will be performing on stages that are dotting the 22- km route of the ‘India roadshow’ in the city.

Huge billboards of the two leaders and replicas of historic places in Gujarat have also been placed along the roads where people will greet the two leaders.

Over 10,000 police personnel, besides officials of the United States Secret Service, and personnel of the National Security Guards (NSG) and the Special Protection Group (SPG) have been deployed for the high profile visit.

The seventh US president to visit India, Trump on Sunday retweeted a video in which his face was superimposed on the hit Indian movie-character Bahubali, showing him as a great saviour.

Modi will accompany Trump to the Sabarmati Ashram, which was home to Mahatma Gandhi from 1917-1930 during India’s freedom struggle.

“Trump will visit the ‘Hriday Kunj’. If he wishes, he will spin a charkha (spinning wheel). We will also gift him a coffee-table book, and a book containing 150 quotations of Gandhi,” the Ashram official said.

Hriday Kunj is a room on the Ashram premises where Mahatma Gandhi and his wife Kasturba Gandhi had lived for 12 years between 1918 and 1930.

The official said the US President would be briefed about Gandhiji and the importance of charkha as a symbol of self-reliance.

There will be a cultural extravaganza at the Motera stadium during the ‘Namaste Trump’ event, where Trump and Modi will address the gathering.

Bollywood singer Kailash Kher and some Gujarati folk singers will perform at the stadium, officials of the Gujarat Cricket Association said.

Students of various government and private schools have also been roped in to perform at cultural events and they have been practicing for days, an official said.

Billboards with slogans hailing Indo-US relations and having pictures of Trump and Modi walking together, shaking hands, and waving at the crowd during the ‘Howdy Modi’ event are dotting the city.