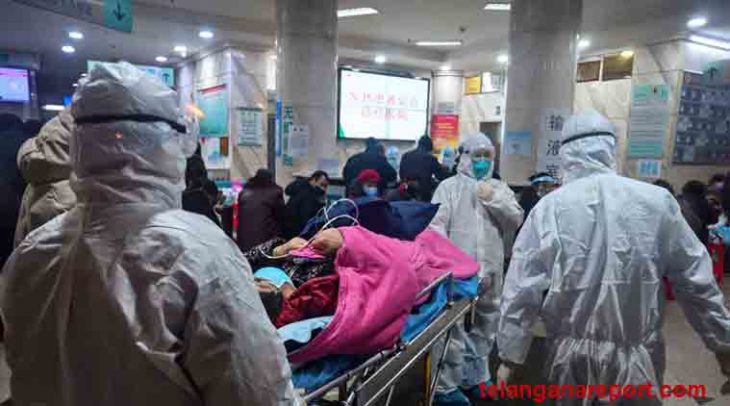 Beijing, Feb 8 : The death toll in China’s novel coronavirus outbreak has sharply risen to 722 with 86 new mortalities in a single day, mostly in the worst-affected Hubei province, while the total number of confirmed cases jumped to 34,546, Chinese health officials said on Saturday.

Among the deaths, 81 are in Hubei province and its provincial capital Wuhan, the epicentre of the virus, two in Heilongjiang, as well as one in Beijing, Henan and Gansu, the commission said.

By the end of Friday, 26 confirmed cases, including one death, have been reported in Hong Kong. Macao reported 10 cases, while Taiwan reported 16 cases, it said.

A total of 4,214 new suspected cases were reported and 1,280 patients became seriously ill, and 510 people were discharged from hospital after recovery, according to the commission.

It added that 6,101 patients remained in severe condition, and 27,657 people were suspected of being infected with the virus. As many as 2,050 people have been discharged from hospital after recovery.

The death toll of the coronavirus cases overseas went up 220 with Japan reporting 86 followed by 33 in Singapore.

Kerala has reported three cases while 647 evacuated Indians from Wuhan are going through quarantine in Manesar.

Meanwhile, Wuhan began combing communities to ensure every confirmed or suspected patient is located and attended to as a senior official vowed to nail any official deserter “to history’s pillar of shame.”

A conference on epidemic control on Thursday ordered the megacity with a population of over 11 million to make all-out efforts to locate patients confirmed or suspected to be infected with the virus, close contacts of confirmed cases, as well as patients with fever.

Once identified, these people must be treated or placed in quarantine in a timely manner, the conference said, adding that “no family or individual shall be neglected,” state-run Xinhua news agency reported.

City officials said checkpoints are being set up outside every community and apartment building to measure residents’ body temperatures, while community workers and volunteers are paying house-to-house visits to conduct checks.

Fever patients found in the process will be escorted to community clinics, which will decide whether they should be quarantined at home or be sent to other isolation areas. Police will step in if a patient refuses to obey quarantine rules and all persuasion fails, officials said.

Chinese health officials have sent more than 11,000 medics, including the country’s best ICU staff, to the city of Wuhan.

Among them, over 3,000 doctors and nurses are intensive care specialists, Guo Yanhong, an official with the National Health Commission, told media here.

“We are fully aware of the urgent need for ICU professionals in Wuhan. The current medics have been working for quite a long time and are exhausted both physically and mentally,” Guo said.

The World Health Organisation chief Tedros Adhanom Ghebreyesus on Friday said the world was running out of masks and other protective equipment against the novel coronavirus.

Pangolins could be responsible for the spread of the deadly coronavirus in China, scientists said on Friday after they found the genome sequence separated from the endangered mammals 99 percent identical to that from infected people.