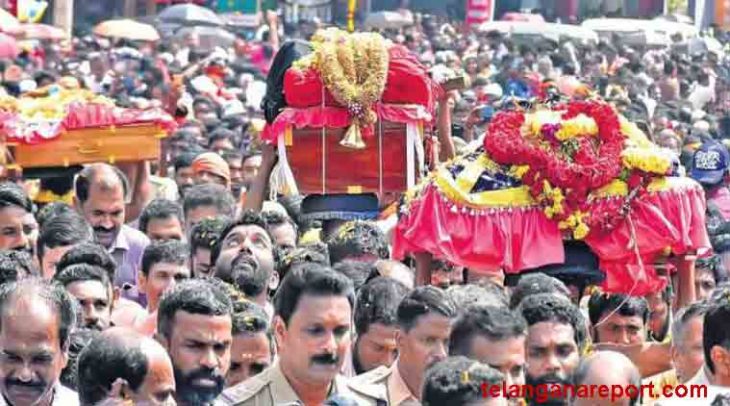 Will abide by SC order over possession of Lord Ayyappa’s

Kochi, Feb 6 : The Kerala government on Thursday said it will comply with the Supreme Court order over the possession of sacred ornaments of Lord Ayyappa, but said it was already under police security at the Pandalam palace.

Devaswom Minister Kadakamaplly Surendran said the government was ready to strengthen the security further, if the Apex Court wanted it to do so.

“The government has not said that it would take the sacred ornaments in its custody. But if the Supreme Court gives a direction in this regard, the government would abide by it.

If the Supreme Court says more security is needed, that will be done,” the Minister told reporters here.

He said this in response to queries on the Supreme Court directive to the Kerala government on Wednesday to suggest measures to safeguard the sacred jewellery of Lord Ayyappa.

A representative of the Pandalam palace also said the sacred ornaments are kept under police security cover and the palace was not concerned about its safety because of the kind of latest security measures being provided to it.

Taking serious note of internal bickering and litigations in the Pandalam Royal family, which is the custodian of sacred ornaments of Sabaraimala temple, the Supreme Court on Wednesday asked the Kerala government to suggest measures to safeguard the jewellery.

The top court said the jewellery does not belong to any family but to Lord Ayyappa and it may appoint a responsible person for the custody of ornaments till the disputes are resolved.

It has asked senior advocate Jaideep Gupta, appearing for Kerala government, to take instructions with regard to safeguarding the ornaments and listed the matter on February 7.

According to legend, Pandalam place is where Lord Ayyappa, the presiding deity of Sabarimala, had his human sojourn as the son of the Raja of Pandalam.