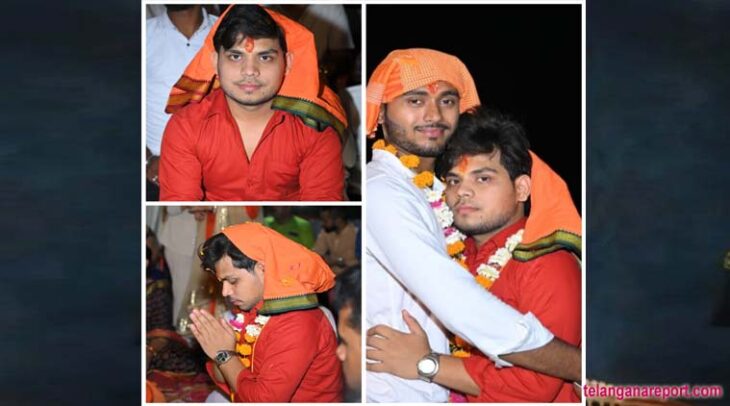 Mumbai, April 18: As we know very well from the news that well-known actor Aayush Upadhyay will get married soon

His Barakshaa ceremony has been held in Lucknow at his home on Monday, 11 April 2022.

Barakshaa is a ritual when all dear one of the bride’s family, usually male members, gathers and goes to the groom’s home to bless him with gifts such as clothes, sweets, fruits, as shagun. The ritual meant that the boy would now be the son-in-law of the family.

On 11 April, the Barakshaa ceremony was done by the bride’s brother and father.

Fans and well-wishers of Aayush Upadhyay are too much excited about Aayush’s marriage.

Aayush Upadhyay and Pragati Pandey are the sweet-romantic couple who are soon going to get knotted for a lifetime of bliss and happiness.

Most of these couple stories have an exciting plot that keeps people and their fans engaged with them and feeling more connected with their mushy love. The same can be said for Aayush and Pragati, who are currently sending major couple goals to all those in love. Interestingly, the social media platform Facebook played cupid for them and brought them together as a couple. They met on Facebook, but after some time realized how they wanted to be together forever and hence, took the plunge and decided to take the relationship to a whole new level.

If we talk about Pragati, so her full name is Pragati Pandey, and her native place is Bihar, but she lives in Delhi. She is very beautiful.And if we talk about her education, she has done her post-graduation from Delhi.

Talking about one such personality is Aayush Upadhyay, who has emerged as a young talented individual creating strides in the entertainment industry with his impeccable skills and talent.

He has recently been garnering the limelight with his debut film, Secret Pocketmaar, which is soon going to hit the screens soon. Featured as a lead role, the latter is seen playing a bold character with his drive against the propelling corruption in the country.

Hailing from the city of Lucknow, Aayush has been inclined towards acting since he was a child. His parents have always been a constant support that has led him to pursue his passion into a full-time profession. Today, he has become one of the youngest and leading names in the film fraternity with a bundle of talent and skills. Apart from this, the actor has also worked in some of the most promising movies like Rishtaa and much more. He has also done many state-level drama theatre shows and uncountable stage performances that have garnered immense love from audiences all around.

A versatile actor, Aayush also holds an interest in music and has instrumental and detailed knowledge of playing different instruments, including Tabla, Harmonium, Guitar, and many more, adding to his portfolio.

Today, he is an inspiration to a lot of youngsters, and his life journey is a real example of hard work and dedication. Currently, he is focused towards building his career and refining his skills to bring out the best in him both as a human and as a profound actor